For the Spring Equinox 2016, 20 March, we commissioned two artists to create a Thaumatrope which will be available to freely download from our website.

A Thaumatrope is a disk with a picture on each side which is attached to two pieces of string, when the strings are twirled quickly between your fingers the two pictures appear to blend into one.

The Druid thaumatrope represents the ancient druid belief in reincarnation and rebirth.
Druids drew inspiration from nature and believed that they would undergo a process of various reincarnations either as a human, animal or natural object such as a tree or a rock, as the thaumatrope spins the Druid appears as something else that would be recognisable in our world and in their otherworld.

Two images merging into one, representing the ever changing and constant regeneration of the urban landscape. What once felt familiar, now feels disconnected; before vanishing into our consciousness as though nothing had ever changed.
Download here: Thaumatrope
20/03/2016 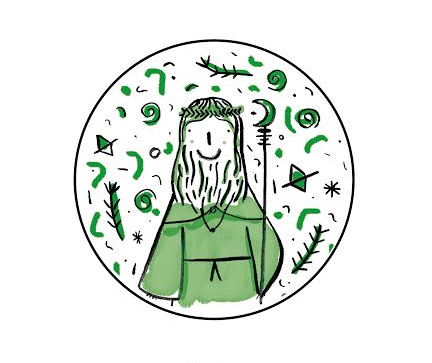